Alfa Romeo 147 Hatchback is a small family car produced by the Italian manufacturer from 2000 to 2010. The car appeared in Poland in December and the next year it was announced Car of the Year 2001 in Europe. 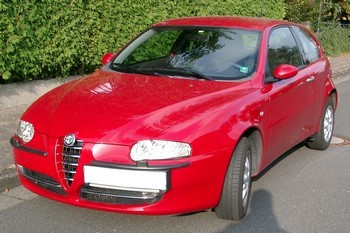 The successor to the Hatchbacks 145 and 146 was built and shares components with the Alfa Romeo 156. The 147 was designed by Walter de’Silv and Wolfgang Egger. In 2001, the 5-door version was introduced, and in 2003 there was the premiere of the sport version with a 250 HP V6 engine and 3-liter capacity, i.e. the GTA version. Six years before the end of production, the facelift version was introduced in addition to changing the suspension and chassis, the car has also changed outside , mainly rear and front lamps, fenders, front mask and bumpers were replaced.

Aluminum wheels are more resistant to damage,have higher strength than steel wheels. In addition, alloy wheels look much nicer on the car. Our product meets both visual and technical requirements. Alloy rims have certificates guaranteeing high quality. In addition to selling aluminum and steel rims, we also offer tires.