Alfa Romeo Giulia - continuator of the 159 model and the having Maserati Ghibli car. It was produced by the well-known Italian unit Fiat under the brand Alfa Romeo. Giulia is a standard class car creating competition for such brands as BMW F30, Mercedes-Benz W205, Renault Talisman and many other D-segment cars. 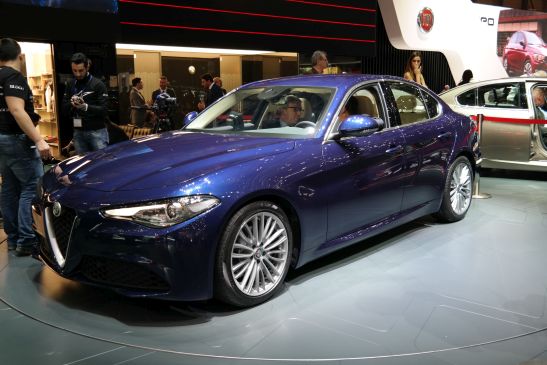 Giulia was presented on June 24, 2015 at the Alfa Romeo Museum in Arese, when the ceremony marking the 105th anniversary of the brand took place. Despite the problems with crash tests, the car started production on April 19, 2016. The car was equipped with the Alfa DNA system, in which we can adapt the driving characteristics to our driving style and road conditions, the integrated braking system (IBS), which is supposed to shorten the braking distance and active suspension, making the car comfortable for the user. The vehicle was made on a Giorgio rear-wheel drive plate, also used in Maserati. The most characteristic element of the vehicle is the front grille, the so-called Scudetto (shield). The car was released in three versions: Giulia, Super and the most powerful version of the QV model (Quadrifoglio Verde) equipped with a double-charged 2.9 v6 unit generating 510 km and over 600 nm developed by a team of Ferrari engineers. Quadrifoglio Verde stands out from other versions not only by its powerful engine, but also by the significant air intakes on the front bumper, bonnet and fenders. The rear of the car is decorated with a spoiler and a diffuser with an outlet for four tailpipes. To reduce the weight of the vehicle, some components are made of aluminum, carbon fiber and composites. The equipment version of Giulia had basic systems such as ABS and ESP. The interior is equipped with a 6-position seat adjustment, Start&amp button; Stop in the leather steering wheel, audio system equipped with 8 speakers and a 6.5-inch display. The basic edition was based on 16-inch wheels, and the Super version on 17-inch, which also stood out with a two-color cockpit and door panels. In addition, the seats are covered with semi-leather and door sills made of aluminum. It was possible to retrofit the version with 18-inch alloy wheels, electric front seat adjustment, 14-speaker Harman&amp audio system; Kardon, which had a power of 900 W. We can choose three-dimensional satellite navigation, 8.8-inch display and 7-inch TFT screen. The QV variant had all of the above-mentioned options with sport seats and Torque Vectoring, Active Aero Splitter, DNA Pro systems that stand out from the Race option from the basic system, which aims to improve the sound of the exhaust system and enable overboost.

As you can see, Alpha has been released on the market in three sizes. Our company offers various designs of aluminum and steel rims for this vehicle. In addition, we also have accessories such as TPMS sensors and tires from well-known manufacturers such as Pirelli. If you have any questions, we provide expert advice. The range we offer is characterized by quality and safety certificates.