Alloy wheels for Audi A6 C6

The success of previous generations of the Audi A6 has also been sustained by the next, third generation C6. It was presented in 2004. The body and interior design came from the hands of the famous and recognized designer - Walter de Silva. 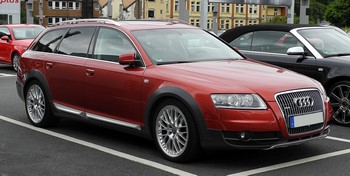 The new model definitely refers to its predecessor, however, it is slightly longer and has modified straps, front and rear. Inside, there is a new Multi Media Interface system, or MMI - a control and entertainment system. Also new is the Tiptronic 6-speed automatic transmission. In 2005, the Audi A6 received the prestigious World Car of the Year award. Two body versions are available - sedan and station wagon (Avant since 2005). A year later, in 2006, the allied strain Allroad joined the range. After a delicate facelift from 2008, which underwent the C6, the rear of the car was much more similar to the smaller A4 model..

We sell steel and aluminum rims for the Audi A6 C6. You can choose from over 1500 models of aluminum wheels. Every demanding customer in our offer will find a pattern that he will like and wants to have these wheel on his car. We also offer winter and summer tires for cars and vans. 195 / 65r15 tires and many other sizes can be purchased from various manufacturers, from the budget class to the Premium class.