Audi R8 - a supercar produced since 2006 in German Neckarsulm. Offered as a 2-door coupe and a 2-door roadster. The production is handled by the daughter company of the VW group, the quattro GmbH company, which specializes in sports vehicles, including the entire RS Audi series. 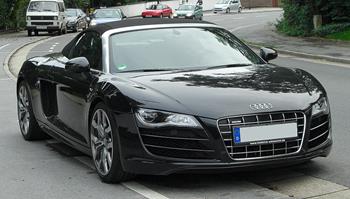 The car was presented at the Paris Motor Show in September 2006, and Walter de'Silva took care of its design. The car is based on the Audi Le Mans quattro model already known in 2003. In 2008, the R8 was honored with the title World Performance Car of the Year, and after the next two years the same title was awarded to the R8 V10 version. The engines with which the manufacturer decided to equip the first generation R8 are V8 FSI with a capacity of 420 to 430 hp and V10 FSI on board with 525 or 560 hp. The power unit is centrally located and the possibility of illuminating the glazed engine cover with LEDs provides an additional visual experience. The R8 is also the first mass-produced car with fully LED headlights. In 2012, dynamic turn signals changing in the direction of travel were also implemented. The whole car body was made of aluminum, while the interior was made of leather, aluminum and carbon fiber. The car's sporty character did not diminish passenger comfort, as the reduction of engine noise was adapted to everyday use. In addition, the car was equipped with magnetic shock absorbers, which made it possible to change the suspension operation by changing the viscosity of the liquid in the shock absorber. In 2009, the R8 Spyder roadster version was introduced, which went on sale in 2010. The automatically controlled roof opens and closes in just 19 seconds. The engine range remained unchanged.

The unusual Audi R8 deserves unique alloy wheels that emphasize the car's sporting character. We invite you to the LadneFelgi.pl store, where you will find alloy wheels in sizes from 18 to 20 ". Experienced employees will help in the appropriate selection of wheel parameters. The offer also includes tires and various accessories. The rims sold are covered by a 36-month warranty.