BMW G30 - the seventh and newest edition of the 5th series from the family of mid-upper class cars produced continuously since 1972. The G30 model is offered in two variants: a 4-door sedan and a 5-door station wagon. The official premiere took place in October 2016, while production began in February 2017. 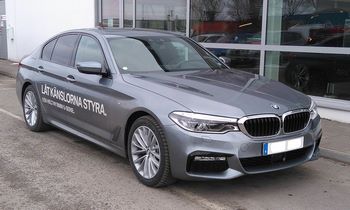 The BMW G30 is built on the platform it shares with the luxury G11 model 7. The 'seven' solutions such as the BMW 530e iPerformance with the Plug-in variant (allowing charging the hybrid from the home socket) and the entire package of advanced steering assistants are also to be moved to the latest edition of the 5 series. Compared to previous generations, the G30 has been slimmed down by nearly 100 kg of its own weight, and a new body style has been introduced, where the drag coefficient has been reduced to 0.22 Cd. The front grill has the ability to close and open air intakes for optimal engine cooling and better aerodynamics when needed. Among the next changes, the G30 boasts the latest version of the iDrive system, which will work with more than 10 "central display, redesigned HUD information display with a covering surface 70% more than before and reflectors with anti-reflection system with a range of up to 500 m. Unlike in previous generations of the 5th series, the new one does not have the GT variant. This version is to function as the GT 6 series under the code name G32. The G30 is a winner of all 5 stars on the Euro NCAP safety test and the title of Car of the Year 2017 in the category of luxury cars according to the British monthly What Car's.

Our store offers a large selection of alloy wheels for the BMW G30. In addition, you can choose from a full range of tires for all seasons, TPMS pressure sensors, regular and locking screws as well as steel wheels. Orders can be placed by phone, via the website or at branches in Gdańsk and Warsaw. Welcome!