The BMW X4 is presented in March 2014 in the United States by the German automotive giant BMW. The debut presentation of the car concept took place in Shanghai in 2013, but the car was officially presented at the New York Auto Show in 2013. 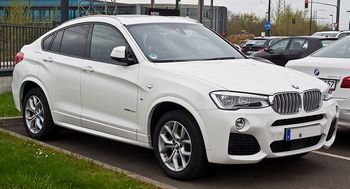 The X4 was built on the basis of the 2nd generation X3 floor panel and shares an identical front with its predecessor. It is distinguished from the previous version by a roof line reaching the highest point above the driver's head and falling down to the tailgate and the rear of the body. The X4 comes standard with an automatic eight-speed gearbox (except xDrive20d), a radio with iDrive controller and a central display; multifunctional sports steering wheel with leather-covered gearshift paddles (except for the model with manual 6-speed gearbox), automatic boot lid control, steering system in the sport version with variable gear ratio, rear parking sensors, fog lights in LED technology and 18-inch alloy wheels, xenon headlights. An additional advantage of the standard equipment is the ConnectedDrive system equipped with, among others iDrive driver, parking assistant, full-color HUD display, non-glare main road lamp system and Driver Assistent Plus with warning about unintentional lane change, active speed controller with Stop& Go function and pedestrian protection. The system also allows you to check traffic information in real time.

We offer alloy wheels for the BMW X4. Additionally, you can buy accessories and tires from us. We provide experienced consultants who will answer your questions in case of any need. Our products have a 3-year warranty.