The beginnings of the Daihatsu brand history began in 1907, when the company began to exist, first under the name Hatsudoki Seizo. The company was involved in the production of engines. 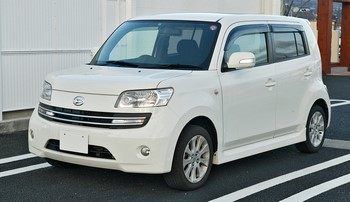 The first auto produced by Daihatsu was called Hijet. Hijet entered production only in 1960. In the late 1960s, the Daihatsu brand was later acquired by the Toyota group. In 1998, Japanese Toyota acquired the controlling stake in Daihatsu. The Charade model attracted attention in global markets. This model was put into production in 1977. In 1986, the Charade model was produced in China.


The brand entered the American market in 1987 with the Charade and Rocky models. In 1998, Toyota acquired a controlling stake of 51.2% in Daihatsu. The Daihatsu brand entered the Polish market quite recently, namely in 2009.

Racing Line alloy wheels are a product we have been offering for over 8 years. Satisfied users are increasing every year, which proves the good quality of the offered goods. We also offer tires from all manufacturers at a surprisingly low price.