Honda CIVIC VIII - The eighth generation of the Japanese car, which is mainly associated with the hatchback body, although it is also available in the form of a sedan and coupe. The car thanks to its appearance is an excellent competition for slightly more stylistically European cars. 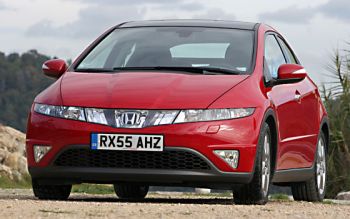 The car was presented by the Japanese Honda group in 2005. Honda in this model decided to break with the conservative and quite boring style. As a result, the eighth generation when it appeared on the market almost looked like a car from the future. The extraordinary silhouette and line of both the front and rear lamps resulted in giving the Honda the nickname UFO. The interior of the car is also unique due to the many sharp edges and the unusual shape of the dashboard. Despite the fact that the vehicle's silhouette has been significantly modernized, the rear axle suspension in the hatchback has been slightly restrained by replacing the multi-link structure with a torsion beam, which was repayable with low failure rates. The compact size of the body did not prevent Honda from gaining a large amount of legroom while maintaining a luggage capacity of 456l. The manufacturer in Civic VIII offered a range of engines providing power from 83 to 260HP. This model also appeared in the much less popular version of the sedan, which had a slightly different interior, retained a multi-link rear suspension, and its external appearance was slightly more subdued, but still modern. In 2009 Honda refreshed the model, modernizing the shape of the dummy, as well as retrofitting individual versions.

The LadneFelgi.pl store has an assortment of 1500 designs of aluminum wheels. Honda civic VIII owners will find rims dedicated to their model, which will give even more character to this unusual body. All rims we sell have certificates confirming high quality. The wheels from our store are guaranteed for up to 36 months.