Honda Civic X Type R - the 5th generation of the sporty version of the Honda Civic, produced since 2017. Presented for the first time in September 2016 in Paris, while the final version with a few changes was released in 2017 at the Geneva fair. This model is the highest version of Civic, which is an expression of Honda's many years of experience in creating highly efficient hatchbacks. This is the first generation Type R, which is regularly sold in North American markets. 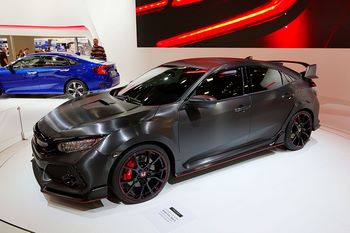 Type R construction is based on the same body as the standard Civic version, however, with a much more aggressive and performance-focused character. The brushed aluminum shell with accented red lines and strips, the recognizable red 'H' mark, the three exhaust tailpipes centrally located, the sports diffuser and the massive racial rear spoiler are just some of the distinctive elements of the new Honda constructors. The external appearance is also a small dose of carbon fiber, from which the front bumper splitter or door sills were made. Both the front and back of the eye are large air ducts with mesh covers. The wheel arches contain 245 mm tires that put the whole thing in motion thanks to 20-inch alloys with a red frame. Many of the basic components have been adapted to the requirements of racing on the race track and very dynamic driving. The new generation has 38% stiffer suspension on turns than its predecessor. Both the front and rear suspension have changed, including by using stiffer swingarms. The rapid acceleration and start-up were stabilized by changing the geometry, and modifications to increase aerodynamics gave more reliable guidance at higher speeds. A new Comfort mode was added to the user's hands, which appeared next to the previously operating + R mode, differing in the nature of suspension damping, throttle response speed and power steering assistance. The interior has everything that could be used in previous editions, such as a multimedia system with a large 7 inch screen, navigation, high quality audio system and a whole bunch of various modern security systems. Under the hood is the most powerful 2.0 L VTEC Turbo engine with 320 hp so far used. It will be operated with a 6-speed gearbox with the RMCS system, which intelligently selects the engine speed according to the gear position.

We offer over 1000 different models of aluminum wheels, complementing it with tires, TPMS sensors and steel wheels, so that everyone can find something for their car. In addition, there are various accessories on sale, such as screws and nuts, valves, spacers and centering rings. Honda Civic X Type R owners will also find something for themselves, including a large selection of 19 and 20-inch alloy wheels.