Honda CR-V II - Japanese SUV, which has good off-road properties, which provided high ground clearance and 4-wheel drive. The car in this generation has become heavier, but thanks to the larger body, it gained practicality. 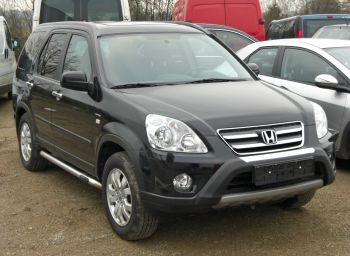 The second generation of the Japanese SUV was launched in 2001. The car was again based on a Honda civic floor plate. Aesthetically, the vehicle gained a more oval shape, which gave it a bit of modernity. Although the body has grown slightly, the trunk capacity has increased from 374l to 527l. The car was initially offered with 2 gasoline engines with 150 and 166HP. In 2005 the car was subjected to a face facelift, during which the front bumper was changed, as well as the lamps with those of the "clear" direction indicators. The engine offer has been expanded to include a 140 HP diesel-powered unit. The technical aspects of the face facelift have reached the introduction of an electronically controlled throttle. Four-wheel drive was also modified, which now reacted faster to loss of traction. The new generation of the vehicle has brought Honda an improvement in safety and provided the best scale result in the IIHS front crash test.

Owners can give a unique style to their vehicle by choosing rims with unique designs. Our store offers rims of proven quality, which is confirmed by certificates and warranty for 3 years.