Honda CR-V III - SUV, which in this generation has gained a lot in appearance through the use of rounded body shapes. The CR-V was still a great alternative to European SUVs. 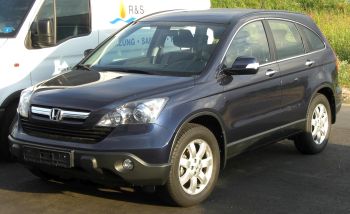 Honda CR-V III is a car that the Japanese manufacturer first introduced to the world in 2006. Like earlier generations, this one was based on the Honda CIVIC VIII design. The manufacturer decided to abandon the tailgate that opened to the side and replace it with a standard-lifting tailgate. The spare wheel has not been installed on the tailgate. The body of the third generation of the model is lower, wider and shorter than its predecessor. This model was available with a diesel power unit known from the previous generation. The engine range was expanded by 150 and 170HP gasoline units. A very large amount of space on the rear sofa, which is additionally moved, in combination with a 524l luggage compartment, makes the CRV a model of practicality. An additional advantage is the high ground clearance and four-wheel drive that the car received as standard. In 2009, the vehicle facelift was made by adding new bumpers, a dummy and rear lights. The engine range has also been modified, where the diesel unit has been replaced by a newer 150HP engine meeting the EURO5 emissions standard. The car lacked one star to complete the Euro NCAP crash tests.

Honda CR-V was equipped with rims from 16 "to even 20" (depending on the option). Owners who want to change rims with those with different parameters can buy alloy wheels in our store that blend in perfectly with their car. The goods we offer have the necessary certificates confirming its quality as well as a 3-year warranty.