Honda CR-Z - a sports hybrid that was available with a manual transmission. The model broke with the image of slow and boring hybrids, proving that maintaining the purity of exhaust gases does not have to compete with performance. 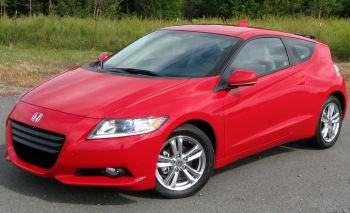 A coupe car launched by Honda in 2010. The car has a hybrid drive, combining an internal combustion engine from the JAZZ model, with a capacity of 114HP and an electric motor offering 14HP. This vehicle is treated as the successor to the CR-X model. In 2012 the car facelift was made, thanks to which the CR-Z gained a new front bumper and a dummy. The car also got a bit of space in the cabin, and the electric motor was slightly modified and gained power. The Japanese Honda hybrid was distinguished by the fact that as one of the few, it was offered with a manual transmission. There was also a Mugen version available on the market with an added mechanical compressor, which brought the vehicle 180KM. Crash tests conducted by Euro NCAP have given the CR-Z a set of stars. Weak demand in Europe meant that the Honda CR-Z was withdrawn from sale in 2014. In 2016 the car underwent minor cosmetic changes, which included bumpers and interior changes. Shortly after, however, the production was announced to end.

Our store offers you alloy wheels as well as accessories necessary for their assembly. A wide selection of technical parameters and designs will make everyone find rims perfectly suited to his car. The high quality of our products is confirmed by certificates and warranty.