Hyundai Tucson III is a continuation of the best-selling model of this Korean manufacturer. The vehicle offers great opportunities to navigate difficult terrain at a reasonable price. 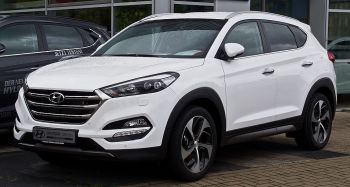 Tucson's naming is a bit embarrassing, because in fact the name was withdrawn from some markets on the occasion of the second generation. So the model produced since 2015. is the third version of the same car, but the second is called Tucson. The body of this vehicle, which was designed by Peter Schreyer, now largely refers to the Santa Fe model. The vehicle was definitely refreshed with a large grill, which has become somewhat the hallmark of Hyundai. The body lines themselves have also gained a bit of clarity, which favors the slightly sportier character of the car. The cabin itself has given slightly more space to its passengers, leaving less space in the trunk. The choice of engines available in Tucson is limited to 2 gasoline units with power from 135HP to 176HP and 4 diesel units, which reach power from 136HP to 184HP.

Although the manufacturer took care of slightly more sport lines in the Tucson model, this impression can be enhanced by choosing the right rim pattern on our part. We would like to remind you that the quality of our goods is confirmed by a warranty for up to 3 years.