Alloy wheels for Hyundai i30

Hyundai i30 is a middle class model. It was constructed by the German Hyundai Center. The first model went out on the streets in 2007 and was a replacement model for Hyundai Elantra. 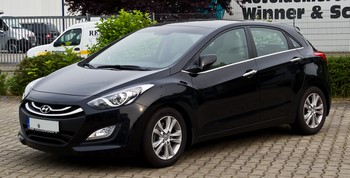 For the production of the car, the floor plate and Kia Ceed components were used. The same year, the car won the "Car of the Year" award. In 2009, the production of this model began in the Czech Republic and then modifications were applied to the car. In 2010, on the other hand, an i30 facelift was carried out and the name changed to i30U. The manufacturer guaranteed a 5-year warranty and a large variety in engines. The new, facelift model was shown at the Geneva Motor Show in 2010. Model production ended in 2012. Since 2012, it is the second generation of the i30 model.

Aluminum and steel rims can be used in winter and summer. Rims 17 and 18 will give the effect of a more attractive car, raise its standard and add a predatory look. The use of smaller sizes will slightly emphasize the appearance of the car. We invite you to our stationary stores in Warsaw and Gdańsk to familiarize yourself with our offer.