Infiniti FX II - Japanese SUV produced by Nissan on the 350Z floor platform. Currently, the model has changed its name to QX70. 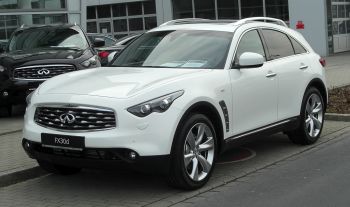 The car was put into production and sale in 2008. The design of the vehicle has retained its previous shape, but has been slightly modernized, which gave it modernity. First of all, the appearance of the front lamps was changed, which gained character, and side air intakes were added. The interior of the car has been completely changed, which has gained on luxury derived from the G37 model. The manufacturer has introduced leather armchairs with decorative stitching, as well as wooden and matte finishes, a redesigned center console, new clocks. The vehicle also changed the front suspension using double wishbones, which improved handling. All European versions of the vehicle were equipped with 4-wheel drive. The car was initially offered in two engine versions - 3.5 and 5.0 (FX35 and FX50 models). The FX37 and FX30d models were also introduced in Europe. The first of them had a 3.7 HP engine with 320HP and the second unit powered with 240HP diesel. In 2011 a face-lift was made to the model that brought a new grill, front bumper, fog lamps and new exterior colors. Heated seats were moved to standard equipment. In 2014, the vehicle name was changed to QX70.

Our store offers rims that will not only be technically matched to the Infiniti FX, but also in terms of style will complement the silhouette of the vehicle. The products sold by us are certified, which ensures buyers about the safety of purchases. In addition, a 36-month warranty is granted on alloy wheels.