Kia Picanto II is a car belonging to the A segment, produced in 2011-2017 and closely related to Hyundai I10. 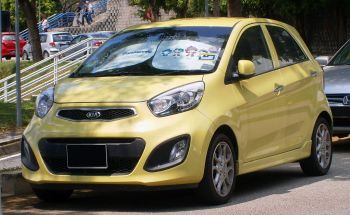 The second generation of Picanto was presented at the Geneva Trade Show in 2011. The new body, which was designed in Germany, gained in dimensions as well as a longer wheelbase, which translated into greater comfort of travel. Picanto is offered with 2 engine versions, both of which are petrol versions. One of them has a capacity of 1l, while the other 1.25l. Picanto is more widely known for its 5-door body, but in Europe there is also a 3-door version, whose length has not changed, but the roof line, doors, bumpers and a few smaller details give the impression of greater dynamics and slightly more sporting performance. The car is available on the aftermarket with both a 4-speed automatic transmission and a 5-speed manual version. Euro NCAP after the crash tests awarded Picanto 4 stars. In 2015 the model was lifted, changing the vehicle front and bumpers.

Kia Picanto II is a city car that is worth equipping with good quality steel wheels. In our store you will also find accessories such as TPMS sensors and valves.