Kia RIO III is a class B car that was presented in 2011. at the Geneva Motor Show. 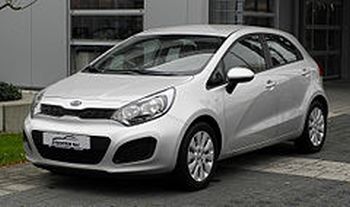 The third generation of the RIO model is again based on the chassis known from Hyundai Accenta. The car is equipped with 1.4 and 1.6l engines, but in European versions the choice has been expanded to include a 1.25l unit, as well as 1.4 and 1.1l diesel engines. To drive the transmission, both 6-speed automatic machines and manual gearboxes with the same number of gears were used, but also 5 and 4-speed gearboxes, whose occurrence depended on the continent of sale. In Europe, a 3-door body is available, whose length remains the same, but the silhouette itself has gained a more sporty line. The 3-door version was also exported in a limited number of 50 explosors to New Zealand, in addition, these versions were better equipped compared to the New Zealand market. After crash tests, Euro NCAP awarded KII Rio a maximum 5 star rating.

KIA Rio is a car with undoubtedly interesting design, which can be further emphasized by the appropriate pattern of alloy wheels. On our site you will find only high-quality goods for which a 3-year warranty is given.