Alloy wheels for KIA Venga I

Kia Venga is a car with a minivan body, which belongs to class B vehicles. 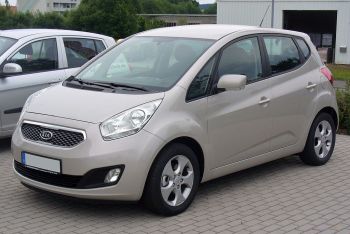 Kia Venga was launched in 2010. and it should be emphasized that the model was intended only for the European market. Venga was built based on the floor platform known from Hyundai i30. The quite compact body of the minivan can be equipped with one of two gasoline engines, which offered 90HP and 125HP respectively. More economical drivers can also opt for diesel units. The Korean manufacturer has prepared a choice between 1.4l and 1.6l, with capacities from 75KM to 128KM. In 2014 the model has been refreshed, during which elements such as bumpers, headlights and rear lamps were changed. In addition, the manufacturer has expanded the range of factory 16 and 17 inch alloy wheels with new designs. Numerous safety systems and the body gave the car a 5-star safety rating after tests carried out by Euro NCAP.

In our offer you will find steel rims that are ideal for winter conditions on KII Venga. In addition, we offer TPMS sensors that will be programmed into your car without additional charge.