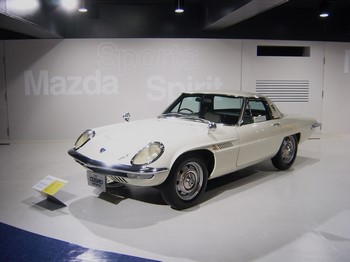 Initially, the company was engaged in the production of machine tools for vehicles and weapons for the Japanese army during World War II, and the distinguishing mark of the Japanese Mazda are Wankel rotary engines. Thanks to the new engine design applications, Mazda cars have developed a lot in power over the 1960s. The brand has decided to start working on sales in the European and US and Canadian markets.


In the 70's Mazda had better and worse years. The crisis that occurred in 1970 caused the purchase of 25% of shares by American Ford. With courage, however, the brand constructed cars with a Wankel engine, which quite quickly gained popularity around the world. An example is the success of the RX-7 and the large Luce sedan at that time. Mazda's financial problems were partly related to low brand recognition. From 1975 to 1991, the Japanese changed the brand logo three times, but each time it was not original and was often mistaken for the marks of other car brands like Renault! The final Mazda badge logo that appears on cars to this day was selected in 1998.


Mazda's collaboration with Ford continued to mourn and bear fruit. The next fruit of this work were pick-ups. Mazda created the B series, while Ford produced the Ranger in North America, which has been offered in Europe since 2007. The breakthrough in sales came in 2004, when models such as Mazda 6 / Atenza, sports RX-8 and Mazda 3 / Axela were proposed. Their high popularity helped the brand financially through sales, but also the interest of customers who appreciated Mazda for the high quality of products, minimized failure rate and originality. In autumn 2005, the new generation MX-5 joined the models, which in 2007 reached the peak of sales in the history of the brand in the number of 800,000 units. There are also 2 new models: Mazda2 and cross-over CX-7.


Mazda seems to be catching the wind again now. Cars sell better and better, which also results in re-expansion in Europe. In the first half of 2008, Mazda decided to open an official branch again, also in Poland.

The LadneFelgi company deals in the sale of aluminum and steel rims and tires. We provide warranty for alloys for 3 years. In our offer you will find tires from all manufacturers. 205/55 r16 tires are especially recommended.