When Louis Renault from the smallest liked things related to mechanics, electricity and engines. In 1899, together with his family brothers Marcel and Fernand, he created the company Renault Freres with the translation means Brothers Renault. 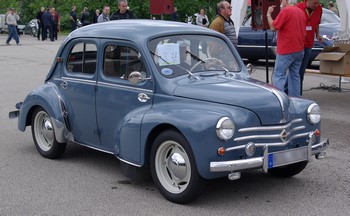 At the age of 21, he built his first car, which he constructed in a workshop that was once a family shed. At the beginning of its activity, the company presented its two models at an exhibition in Paris. Production was 76 vehicles, and the factory already had about 110 people. In 1902, the company built its own engine, of course the originator was Louis Renault. In 1903 Marcel Renault died in a tragic accident during the Paris-Madrid race, and in 1909 Fernand died. Then Louis changed the company name to Les Automobiles Renault. At the factory, he introduced new production methods, which he took from Ford, in such a way that Renault models were also competitively priced.


During World War I, Renault began to produce Entente for the needs of the army. Trucks, cannon tractors, aircraft engines and tanks began to leave the plant, including the revolutionary light FT-17itd. After the end of the war, most armies had the Renault FT-17 tank in their ranks. In 1922, the name changed again, this time to Renault Societe Anonyme de Usines. By the end of the 1930s, the company was developing well, they had more and more models. During the German occupation, Renault factories had to produce tanks for the Nazi army. The first post-war car was 4 CV, whose prototype was developed in 1942 by Louis Renault.


At the same time, truck production continued to grow. In 1963, the factory branch that dealt with their manufacture - Saviem, established cooperation in the creation of engines with the German brand MAN. In 1975 another truck manufacturer, Berliet, became involved. Since 1980, the name Berliet no longer exists completely and the production of commercial models Trafic and Master began. In the meantime, from 1970, all cars of the brand had to have standard seat belts.


Currently, Renault can safely be said to be the second selling brand in Europe. However, the Renault group is not just a French brand. Cooperation with Romanian Dacia has been ongoing since the 1970s. In 1999, Renault acquires 51% of Dacia's shares, and in 2004 buys another one and has a total of 99.3%. The Renault-Nissan agreement is also signed in March. Renault buys 36, 8% shares of the Japanese company for 5 billion euros. In 2002, it increases its stake in Nissan to 44, 4%, and in turn Nissan first became the owner of 13, 5%, which will soon be increased to a 15% stake in Renault.


In 2000, the Renault Samsung Motors company was created on the South Korean market, in which Renault constituted 70% of shares and the Samsung concern 30%. Renault became the first European manufacturer to construct and manufacture cars in South Korea. Currently, the Renault-Nissan group, including the Dacia and Samsung brands, is the fourth largest in the world in terms of production and sales.

Rims for the following models of the brand are most often sold RENAULT: Avantime, Clio, Espace, Fluence, Grand Modus, Grand Scenic, Kangoo, Koleos, Laguna, Master, Megane(I,II,III), Modus, Scenic(I,II,III), Thalia, Trafic, Twingo, Vel Satis, Wind. We offer Racing Line alloy wheels for Renault and other car brands. We also sell tires from all manufacturers, nokian tires are popular among customers. Only with us good quality at a low price. We invite you to visit our stationary stores in Warsaw and Gdansk, our sellers will advise you in choosing a rim for your car.