The logo and brand name refer to astrology. The word Subaru is a galaxy in Japanese, and the logo of this brand depicts a constellation of six stars. 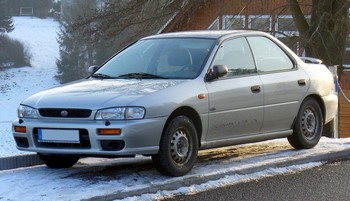 The beginnings of the company began in 1917, when Chikuhei Nakajima - an innovator in Japanese aviation technology founded the company - Nakajima Aircraft Company, but the first car was not released until 1954.


After World War II, Nakajima Aircraft was divided into 12 separate companies. In 1953, six of them united into the Fuji Heavy Industries concern, which produced, among others, construction equipment and agricultural machinery. Precisely because six companies have merged, the brand logo is a constellation of six stars.


This year, it was also decided to create a department responsible for the design and construction of cars. Immediately after this, the first prototype of the passenger car codenamed P-1 was published. Next year, Subaru 1500 was presented, which turned out to be a technological masterpiece. The design of this car was at a high level, however, the distribution network failed, so the production forces were shifted to the construction of buses. The first of them was produced in 1958, and in the same year the production of passenger cars began again, which contributed to the launch of the Subaru 360.


The first four-wheel drive model was produced in 1968 - it was Subaru Leone. Subaru throughout its history has shocked the quality of driving manufactured cars.

The most-sold rims for the following SUBARU models: Forester, Impreza, Justy, Legacy (III, IV, V), Outback, Tribeca. We offer steel and aluminum rims for every car. Not sure if alloys are a good choice? Aluminum wheels are more resistant to dynamic impact than steel wheels. We offer a wide range of alloy wheels in various sizes. Our goods have ASO, VIA, ISO certificates and we give 36 months warranty for it.