Alfa Romeo GT is a 5-seat Coupe was produced by the Italian group in the years 2003 - 2010. The GT was presented in March 2003 at the Geneva Motor Show and went on sale to the Italian market in February 2004. 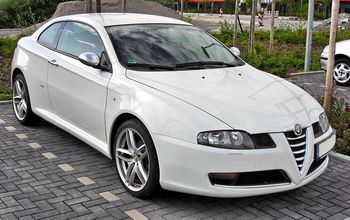 GT was based on Alfa Romeo 156 and 147 components, while the Italian Bertone took care of the body design. The car was initially offered with 2.0 and 3.2 l gasoline engines (also used in the 166th), as well as 1.9 l common rail diesel. GT can be purchased with a five or six-speed manual transmission and a five-speed electrohydraulic transmission - Selespeed version 2.0 JTS. Selespeed is a kind of combination of automatic and sequential gearbox from the point of view of use rather than construction. Allows shifting up or down one gear using the steering wheel buttons or the joystick located instead of the standard gear lever. There is also a city mode option where gear shifts occur spontaneously. In 2006, a four-cylinder unit with a capacity of 1.8 with two candles for each cylinder (Twin Spark), a variable-length intake system and a variable phase system for suction valves joined the engine palette. Thanks to this, 140KM was achieved. In the same year, version 1.9 JTD Q2 with a limited slip differential was introduced.

Our store offers a wide selection of rims for a given model in sizes from 18 "to 20" at very low prices. Additionally, you can buy tires, accessories and steel rims from us. In the event of problems we professional advice. Our articles have a safety certificate.