Alloy wheels for Audi A3 8V

Audi A3 8V - the latest, third edition of the A3 model produced in the version of a 2-door convertible, 3 and 5-door hatchback and a 4-door sedan. The car belongs to the C segment, the production of which started in 2012. 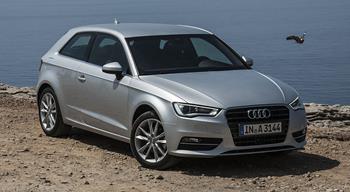 The presentation of the 8V model took place in 2012 at the Geneva Motor Show. The design of the car is covered by the Volkswagen MQB platform. The use of very light materials by Audi resulted in a reduction of the car's body weight, thanks to which the three-wheeled version is 80 kg lighter than its predecessor. Available in a large range of TFSI and TDI gasoline engines, in 2013 Audi began operating 1.4 natural gas engines. The same year, a hybrid combining a 150-horsepower gasoline engine with a 75 kW electric motor consisting of 96 cells was put into production. With the introduction of the new version of the model, attempts at visual changes in the body, giving it a more sporty character, I decided to implement many new technological solutions. The Cylinder on Demand system enables the connection of two of the four cylinders for economical driving during low engine loads. Innovation in driver assistance deserves attention: road sign recognition system, adaptive cruise control, lane and lane change assistants as well as developed safety systems. In 2014, the car received the prestigious title of "World Car of the Year 2014". In December of the same year, the most powerful installment of the generation was presented, i.e. the new Audi RS3 with 2.5 TFSI engine, available in the Sportback version. Mid-2016 is the debut refreshed version of the A3, which brought a new design of the front belt and headlights. Wheel designs and body colors were also added, and assistance systems were introduced, including emergency assistance, stopping the car in the event of a collision being detected. The engine range includes a 3-cylinder 1.0 TFSI engine with 115 HP.

A huge selection of alloy wheels available in our company's offer allows you to choose a pattern for every taste. We invite you to visit our stationary points in person, where employees will advise on the adjustment of wheel parameters to the car, as well as the selection of tires and accessories.